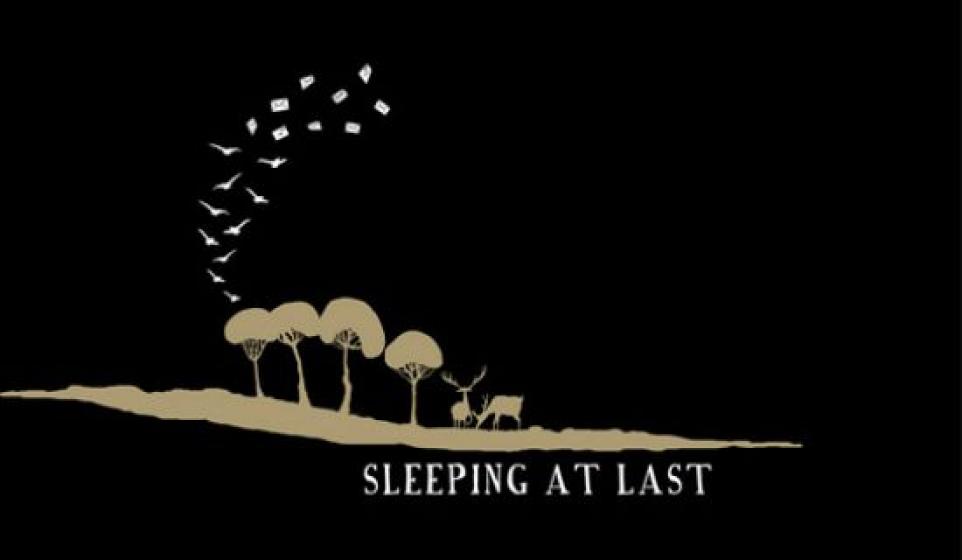 Unless you hail from or around the Western Chicago Suburban of Wheaton, which exists to sustain an evangelical university which produces the likes of Billy Graham and Wes Craven, you're probably unfamiliar with emerging artist, Sleeping At Last.

You really have no one to blame for this but your own ignorance, since Ryan O'Neal has been consistently churning out excellent music under the Sleeping At Last moniker since the turn of the Millennium.

Just 'cause you're late for the party doesn't mean you can't stay.

SLEEPING AT LAST "YOU ARE ENOUGH"

Starting out in his hometown with brother Chris and friend Dan Pedrue, Ryan's distinctive songwriting style and dramatic vocals defined Sleeping At Last from the start. The trio amassed a small, but cult-like local following. They began to garner some national attention after opening for Kill Hannah and Plain White T's. One person to standup and take notice was Billy Corgan, the lead singer of The Smashing Pumpkins (it feels remarkably strange that I need to note that, but how many people under the age of 18 know who they are?), who signed Sleeping At Last to Interscope Records in 2002. A year later the band released their debut LP, Ghosts, to critical acclaim and a slew of opening gigs for national acts like Switchfoot, Yellowcard, Zwan, and Something Corporate.

With a steady evolution from straightforward indie rock to baroque folk to orchestral pop to emo dream pop, O'Neal has shown his versatility as both a songwriter and multi-instrumentalists. While Chad O'Neal and Dan Perdue eventually left the band to peruse other interests, Ryan continues to create highly affective music for his small but growing fan base to devour.

The band's biggest brush with fame was penning an original song for The Twilight Saga: Breaking Dawn - Part 1 soundtrack. "Turn The Page" plays like the rest of Sleep's At Last's catalog, that is: lovely and quietly spectacular.

SLEEPING AT LAST "TURN THE PAGE"

With a current sound that resembles Perfume Genius, Sufjan Stephens, and Volcano Choir, Sleeping At Last seems to have found a perfect groove. Now essentially a solo vehicle for Ryan O'Neil, the singular vision of the band has led to a group of songs that are as creative and diverse as ever. Musically O'Neal creates lush and layered soundscapes that tend to be minimalistic and expansive at the same time. Sleeping At Last is masterful in its shifting between a hushed lullaby to swelling ballad.

Lyrically O'Neal examines the world through the prism of Christianity. His beliefs never come across as preachy or forced, instead they appear organic and genuinely throughout his songs. A certain type of person ignores Sleeping At Last's music because they're a "Christian" band, which is a foolish presumption that dismisses the entire purpose of songwriting.

Despite what appears to be an undue influence on the political and legislative landscape, Christians have an increasingly diminishing impact on the culture at large. While much of the perceived persecution Christians claim is nonexistent and borderline satirical, it is a real issue in the arts. Many artists are punished or looked over because of their faith. Songwriters like Damien Jurado, David Bazan (currently divorced from Christ), Michael Nau, and Jason Martin never receive their just due, in part because of their beliefs and the beliefs of their core fans. To a much lesser extent, even a savant like Sufjan Stephens suffers from this type of marginalization.

Ryan O'Neal is an artist who, for whatever reason, remains tethered to a small-but-loyal fan base. The niché community that devours his art is likely the reason for his inability to achieve national prominence. While this is unfair, Sleeping At Last makes music that reminds us that despite the inherent inequalities of life, grace and beauty still abound.

If you haven't been listening till now, well that's your fault.

Pucken was the Curator who brought Sleeping At Last to our attention. Let Bitcandy pay you for your musical knowledge. Find out how to become a Curator right now.