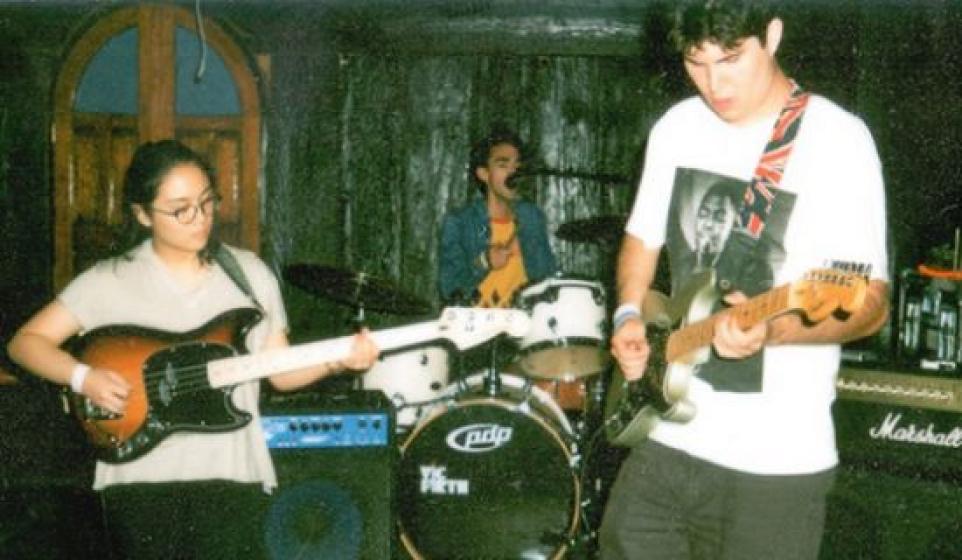 It helps that Heritage High School in Brentwood, California, where Daniel, Zach, and Melina all went, looks like it was crafted on a Hollywood soundstage.

The trio forge a deep connection while making some kickass, gloomy surf-rock in the vein of Real Estate, Beach Fossils, Big Deal, Girls (R.I.P.), etc.. Along the way a love-triangle is developed among our three heroes and then in the third season the show would go completely off the rails and pop culture would quickly move on.

Summer Peaks is not a TV Show, which is a good thing, because the music would never be this good on the telly.

SUMMER PEAKS “KING OF THE ROAD”

The real life version of Summer Peaks is far less dramatic. A simple Facebook search of the band members reveals that one of them is in a relationship with someone who isn’t a part of the band (unless you count making the cover art as being part of the band). It’s almost assuredly not a good thing how much we can learn about a stranger within a few seconds. Or at least I think that was the point of Sandra Bullock’s The Net.

Anyways, with “King of The Road” Summer Peaks has a sure-fire single that separates them from all the other California and wanna-be-California bands who are crafting their sound after the likes of Beach Fossils and Wild Nothing. This isn’t to discredit the rest of Summer Peaks catalog, it’s just to say that the best things seem to lie ahead for this trio.

SUMMER PEAKS “WE CAN LAST”

Having briefly chatted with Summer Peaks, it seems impossible that they’d be capable of the drama needed to sustain a TV show. They were very nice and helpful. In fact I think they redeemed Brentwood for, which I had previously written off as ‘bougie as fuck.’ They seem like good people, which ultimately is irrelevant since they make really good music.

“King of The Road” will act as the lead single off a new album Saturday, which is set to drop this Friday. If history is any indicator, said record will be free. Seriously, check out Summer Peaks bandcamp for a veritable cornucopia of good free music. The gang told me that the upbeat, popish feel of “King of The Road” is a sign of what to expect from Saturday, which has all of us here at Bitcandy even more excited for this Friday.

So while it may not be two better-than-average seasons of teen melodrama, Summer Peaks has the potential to be far, far better than that.

Thanks to the always great Brian Hadsell for letting us know about Summer Peaks. You too can get paid for discovering new music. Become a Bitcandy Curator today!