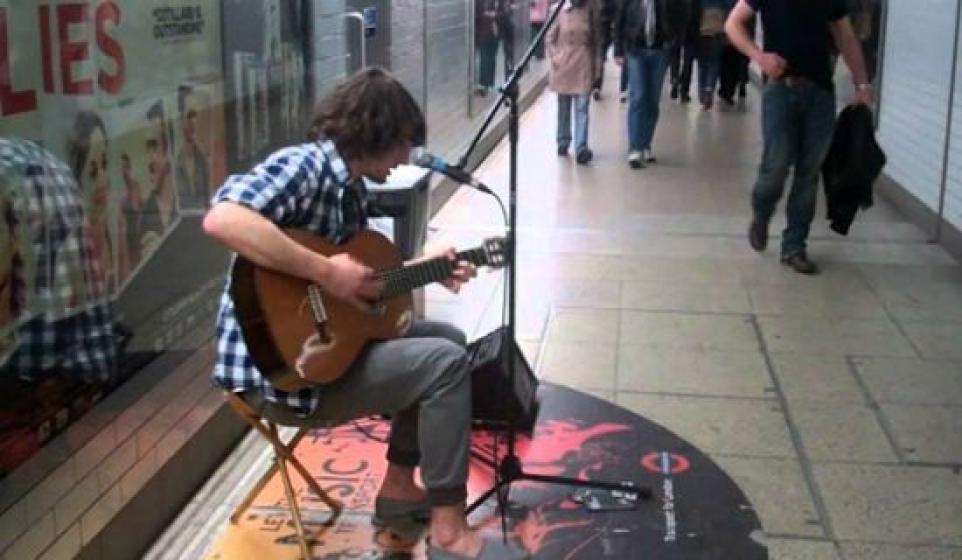 What first strikes you about new artist Thom Byles' music is its warmth. This sort of ethereal, ambient folk rarely has so much sunny, coziness to it. The young singer-songwriter creates songs that sound like the soundtracks to those glorious earlier morning moments in which the sun is shinning upon everything and the world and all its infinite possibilities seem open to you.

Wielding an acoustic guitar, ukulele, and handmade-percussions, Byles takes you places with his music. Each of his songs engulfs you in its atmosphere. Resist this music's charm at your own peril. As for me, I'm happy to let it overtake me.

Thom Byles currently sets up HQ in Greenwich, London, but the English/Mexican attended high school in Mexico City. One has to wonder if his current dreary surroundings will have an effect on Thom's upbeat, inviting music. Thus far Byles has a total of 10 songs in his catalogue, so perhaps it's foolish to discuss what an artist may or may not sound like going forward at such an infantile state in their career. It would be similarly foolish to dismiss Thom Byles because of the sparcity of his work.

Byles' songs are lo-fi and simplistic without feeling slow or boring. He's got an uncanny falsetto that is sure to garner plenty of comparisons to Bon Iver on his ascent to stardom, or whatever he's destined for. I hate to compare emerging artists like Thom Byles to established acts, because it feels like a reduction of his unique sound. But since comparisons are the easiest ways for us humans to understand things, I will say that Byles sounds reminiscent of Ben Cooper's Radical Face, José González, Elliot Smith, and even Perfume Genius.

Mostly though, Byles sounds like a fresh and unique artist in a genre that's so often stale and repetitive.

In case you're not already sold on Thom Byles, please note that all of his songs are available for free over on his Bandcamp. Well not free per se, but you can enter $0.00 as the price on the name-your-price tool and that makes them free. You really should pay for his music though; its quality certainly warrants it. But free is free, so do what you must.

Just be sure to support Thom Byles in whatever way you can, because if there's one thing that's for certain, it's that we all should want him to continue making music.

Pavit B clued us into to the warm sounds of Thom Byles and we paid him for this great tip. We'd like to do the same for you and any unknown musical discoveries you're sitting on. Become a Bitcandy Curator today. Change the way you listen to music, actually get paid for it!