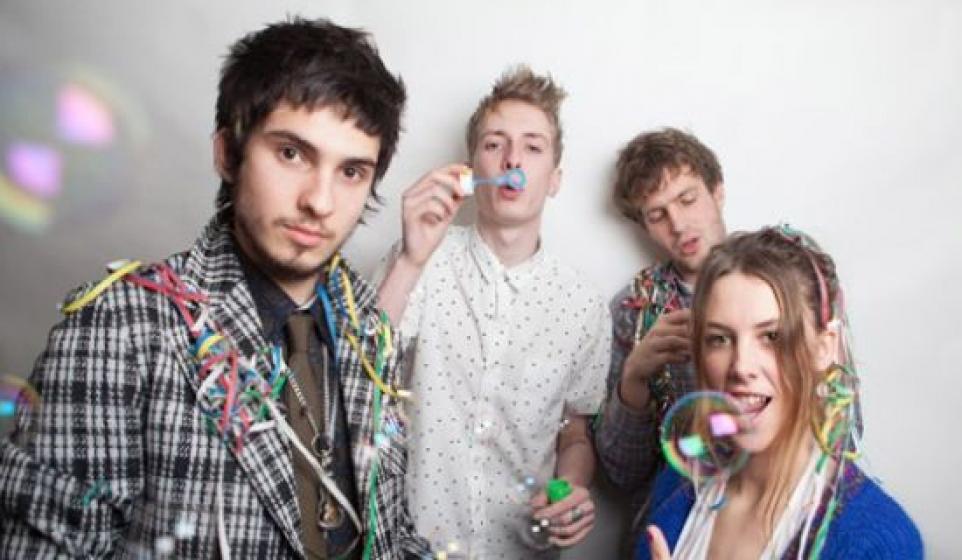 Named after an Angela Carter short story of the same name, new artist Wolf Alice have quickly captured the imagination of rock fans and bloggers the world 'round. With a sound Clash Magazine described as "The love child of grunge and folk," the North London quartet has a raved about live show, a set of dynamite singles, a critically acclaimed EP, and what seems to be assured stardom on the horizon. This is a band that's cruising right past the 'one to watch' phase of their career and seems primed to step into the spotlight.

As you look at who Wolf Alice currently is and how bright their future looks, it's best to take a step back and look at where they came from to understand why this band has everyone who listens to them falling in love with their work. Just like all of us, Wolf Alice's past explains their present better than anything else.

What initially started as the bedroom project of singer Ellie Rowsell has grown into something far more dynamic and electric than anyone anticipated. Ellie poured her heart and soul into several tracks and started to preform them live with kindred spirit and guitarist Joff. Apparently that's his whole and actual name. I don't get it either.

Ellie and Joff did made the rounds, playing pubs and open mic nights, using most of the same material you hear from the band now. The response was minimal at best. Few noticed the depth of the songs Rowsell had created, and after months of handwork the band had only, like, 10 Facebook Likes. And in this digital age in which you're only as important as the number of social media followers you have, this was clearly a bad thing. This marked a turning point for the band, as Ellie and Joff turned their anger and frustration into their amps.

The first person to notice the bands change in demeanor was drummer Joel Amey, although he didn't note the increase in grundginess to the proceedings; instead he looked at what was going on beneath the added noise. Like most people who hear Wolf Alice eventually are, Joel was drawn in by the actual songs. "It was just great to hear someone actually SINGING A MELODY," Joel said in regards to when he first saw the duo perform at Power Bar. He knew he wanted to work with them, and he eventually ended up adding the percussion that gives the band's music the oomph that keeps people coming back. Wolf Alice eventually rounded out their lineup by adding Theo Ellis to play bass.

Now with a full arsenal of raw energy at their disposal, Wolf Alice is finally living up to their name. You've got the innocence of Rowsell's enchanting songwriting to go along with the distortion and noise to show you've got bite.

When I look at Wolf Alice I ultimately see those Russian Dolls in which smaller versions of the same doll are inside a larger one. I googled this shit, and they're actually called Matryoshka dolls, and Wolf Alice is exactly like a Matryoshka Doll. They started as the brainchild of Ellie Rowsell, and at their very core this band is still all about her songs. But they've added layers to grow into their current size. I suppose you could argue every band is like this, or at least the best ones always seem to be. This may be true, I don't know, but I do know that it's readily apparent in the case of Wolf Alice.

"Bros" is a perfect example of how this band builds off those original bedroom sounds. Long one of Joff's favorite songs of Ellie's, the duo never quite found a way to make it work. Now with two other people fleshing out their sound, they have their best song to date. This cut wouldn't be possible without all four members of the band working in unison to create sprawling soundscape that's part indie/punk/psychedelic and all awesome.

But "Bros" also wouldn't be possible if it hadn't been for a girl writing it in her bedroom a long time ago.

Wolf Alice has their second EP, Creature Songs, due out at the end of this May. The band's sound ranges from The xx to Dum Dum Girls to Daughter to Hole. Ms. Rowsell has stated her affection for bands that never write the same song twice, and it's possible that Wolf Alice just may be one of those bands. I'm just glad we get to find out.