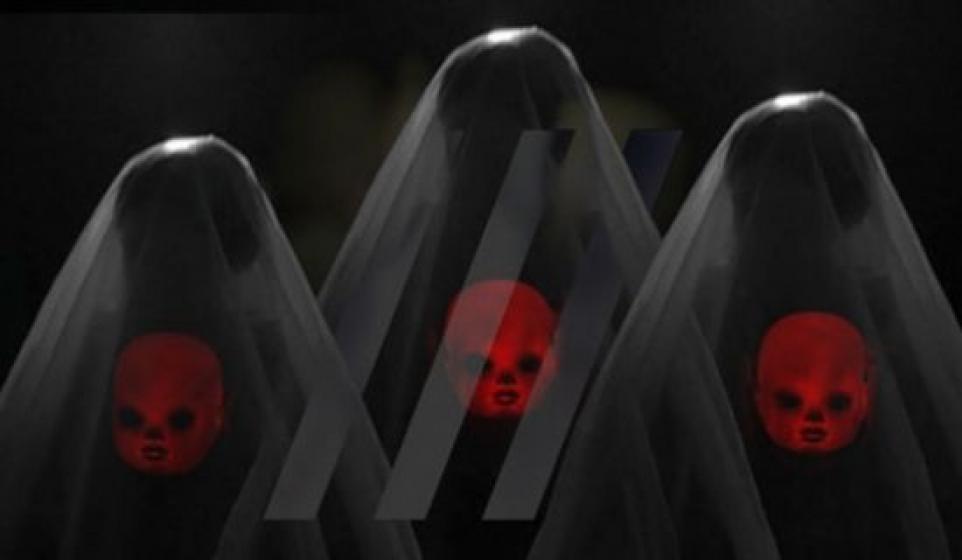 Today's New Find do not just "have" an air of mystery about them. They live, breath and thrive on their enigmatic oxygen. And in this aesthetics obsessed society, there is something deliciously riveting about music sans an unequivocal, Google Image-able architect. Some bloggers may scamper from this aural anonymity, out of fear they are being seduced by a major label in-job. But when the music is as solid as NO CEREMONY///'s, does it really matter?

That is not to say I know shit about NO CEREMONY///. I DO know they are a trio comprising two male knob-twiddlers and a female singer, and I DO know they originate from the sonic metropolis that is Manchester, UK. But here on out, all we have is the music. And said music, to employ a cringe worthy cliché, speaks for itself.

You may have already caught NO CEREMONY///'s debut single, “HURTLOVE” – a minimalistic sliver of creeping electronica, built around a reverberating piano – which was included on Diplo's “Best of 2011” compilation.

But my lobes were personally piqued by a more recent effort, “HEARTBREAKER.” Gone is the piano, replaced instead by a piercing, angular guitar, guest-axed by none other than Joey Santiago of the Pixies (I am not shitting you!).

“HOLDONME” is the latest addition to NO CEREMONY///'s absorbing arsenal. The song continues to hone the dissonance that I have come to define as “peaceful turbulence,” fusing gender-neutral vocals with a percolating, four-to-the-floor beat, which teases at, but never quite touches its zenith.

There is no word on a debut album yet, other than it is very much in the works. Until I know more, I recommend that you click on over to NO CEREMONY///'s official website (they do not “do” Facebook, dahling), so you can continue to wrap your ears around these mystifying Mancunians...