FEATURED FIND: ABOUT YOU RETURNS WITH AN ELECTRIC ANTHEM FOR EARTH DAY + STUNNING NEW MUSIC VIDEO

It's fair to say we have a complicated relationship with Nature, especially if you were to get her side of things. The Earth is literally responsible for all things bright and beautiful, the origin of all beauty, all pleasure, all sensuality, all treasures. And yet, in spite of this, we neglect her, mistreat her, at times downright abuse her. How to reconcile this tension, this seeming death drive with humanity seeing a yawning chasm and deciding to floor it?

This tumultuous, often unhealthy dynamic is unearthed and explored in a sensuous, stylish new music from Los Angeles-based singer/songwriter Max Poscente, who makes music under the name About You.

We first gushed about About You when he released "MoNa" as a single back in April in honor of Earth Day, enthusing about the "framework of a spare, sparse Gibson SG hollow body and Poscente's silken falsetto." At the time of release, Poscente shared a video of him debuting the single as a stripped-down solo recording, which showcases the song's passion and Poscente's talents as a musician, singer, and performer.

It just didn't fully capture the epicness of the song's vision.

Now we have a fully cinematic new music video, casting humanity's complicated relationship with the natural world in the allegory of a troubled relationship. The music video for "MoNa" is sensual, sensuous, and slightly disturbing, dripping with dark Gothic neoclassicism - dark eyes and dripping blood, a mouthful of diamonds, cigarettes and impending. It's heavy stuff, but it looks great. Tackling heavy, heady subject matter with style is mandatory if we hope to deal with massive structural issues before it's too late.

ABOUT YOU - “MONA” (OFFICIAL VIDEO)

Los Angeles' About You returns with his first single in three years with an electric anthem for Earth Day, “MoNa.”

Singer-songwriter music is some of the most unforgiving, demanding music to pull off well. Pop music, hip-hop, and electronic music all offer the opportunity to "fix things in post," or hide behind studio trickery and artifice. It's like the difference between a minimalist one-person/one-set play versus a Michael Bay blockbuster. It's so much easier to hide behind a flood of cartoon robots and CGI kraken than to carry an entire production with nothing but intonation, inflection, facial expressions, and body language.

Paradoxically, this makes rock, folk, and blues-derived music some of the most challenging to pull off well. Someone has to know how to really play, how to really sing, and have something to really make someone standout. When it works, it's truly thrilling.

"MoNa," - the first single from Texas-born/LA-based singer/songwriter Max Poscente, who records under the name About You - really works. Built around a framework of a spare, sparse Gibson SG hollow body and Poscente's silken falsetto, "MoNa"'s personification of our current climate crisis, is firmly in-line with classic bluesmen like BB King as well as more modern practitioners like M. Ward, Elliott Smith, or the late, lamented Jeff Buckley. Like these modern-day troubadours, "MoNa'' reminds us how much a simple, well-written and performed single can still push things forward while still being rooted in classicism, with a focus on tone, technique, and songwriting.

ABOUT YOU - MONA (STRIPPED)

All of which can be found, in spades, on Poscente's first single in 3 years. It also offers an opportunity to reassess Poscente's earliest singles. Poscente's Texas-by-way-of-Los-Angeles lineage makes perfect sense, as he manages to split the difference between classic Rockabilly Americana, thanks in no small part to his collaboration with producer Jeff Saenz of Modern Electric Sound Recorders fame, who's previous production credits range from Nikki Lane, The Texas Gentlemen, and The Reverend Horton Heat. The bones of Americana are then fleshed out with more of an erudite, cosmopolitan singer-songwriter touch that is pure L.A., continuing in a long, proud tradition, connecting Jackson Browne to Randy Newman to Beach Boys' collaborator Van Dyke Parks.

Which is to say,there's a lot  to get lost in and explore, as Poscente's material glistens with subtle string arrangements, woozy psychedelic mellotrons and organs, and the occasional very tasteful, highly effective guitar freakout, reminiscent of the likes of David Bowie. You can find another Bowie reference on 2018's "Hunky Dory," although it doesn't sound much like The Thin White Duke, sounding more like a soulful Iron & Wine outtake.

ABOUT YOU - HUNKY DORY

Given the repeat references, it's hard not to read the Bowie allusions as a mission statement. Max Poscente seems intent on revivifying Bowie 1.0, reminding the world Davy Jones was a compelling songwriter, performer, and instrumentalist long before the gender-bending and persona hacking. With About You, Max Poscente reminds us that none of that matters to make an exceptional musician that is well worthy of our attention and adoration.

If you're a fan of singer-songwriter or rock music of any kind, from any era, you'll find something to flip out over in About You's music. Here's to hoping it's a signal of a return to humble, heartfelt music, free of gimmicks and glowing with heart. It's a reminder that humble and personal does not necessarily have to mean lofi. As we saw with the first wave of singer-songwriters in the early 70s, like the previously mentioned Jackson Browne or the under-appreciated James Taylor, you can still have lavish, deluxe productions AND be stripped-down and confessional. It's a lesson for musicians working in any genre, as there's much to be said for making sure that every single element is perfect - perfectly placed and polished to perfection. It lets you fall under its spell - and stay there.

"MoNa"  is the newest single from About You's upcoming album of the same name. It's setting the bar extremely high, and We Are: The Guard cannot wait to hear the whole thing!

We chatted with Max about “MoNa,” inspirations, and more:

WE ARE: THE GUARD: Hey Max! Thanks so much for taking the time to chat with us and congrats on the release of "MoNa." How does it feel to be releasing music again?

ABOUT YOU: Like a long time coming. Feeling a lot of gratitude for everyone involved in making this release happen.

WE ARE: THE GUARD:  Can you tell us the inspiration behind the track, the story of making it, and the meaning of the lyrics?

ABOUT YOU: First came this guitar riff. It was so simple, but bold-feeling. I knew it was the start of something great. I continued playing the riff and mumbling over it, landing on the name "MoNa," just cause I liked the way it sounded. Then I had the idea to make "MoNa" an abbreviation for "mother nature." I then saw an opportunity to tell a story I was passionate about, which is the current climate crisis/the relationship between mankind and planet earth. The lyrics tell this story through an abusive relationship between two people: MoNa and Mortal. The song acts more so as a cautionary tale, in hopes to inspire more individual change for sustainable futures.

AY: One of my best friends, Jeff Saenz, approached me- asking if he could produce About You out of his studio (Modern Electric) in my hometown of Dallas. "MoNa" was the first song we cut with my friend Ryan Saavadra as assistant engineer. I expressed to him my desire to feature Jay-Z inspired drums and in a blink of an eye, Jason had programmed the whole new beat to the song. After this new beat, I rewrote and recut the bass line to fit the drums, and we started leaning heavier into this marriage of rock n roll and hip hop. This was when “MoNa” began taking shape. The instrumentation in the track was carefully considered, all to exist in this world of sound we had created. And after a year of flying back to Dallas from LA to work on music, it was off to mixing and mastering.

AY: I started guitar lessons at 6, and went to Booker T Washington Highschool for the Performing and Visual Arts in Dallas, TX for guitar and voice. After graduating, I went to Berklee College of Music in Boston for a year and a half, and am now living in LA.

WATG: Who are some of your all time biggest musical inspirations and have they changed/evolved since you first started making music?

AY: What's great about having those original influences is how you can come back to them and they mean different things later in your life. For me, those are The Beatles, Jack White, Kanye, St. Vincent, Nine Inch Nails, Frank Ocean, and recently Dijon.

WATG: Who are some of your biggest inspirations in life?

AY: My family and friends are really my greatest inspirations. My late uncle, Kirk, played a huge role in my early years. The people I collaborate with inspire me, like Jeff. And a lot of my musical influences are also career influences.

“MoNa” is available now on all streaming platforms: 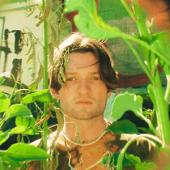