While We Are: The Guard discovers most artists by way of their original music, I was actually turned on to today's Featured Find, Adam Melchor, through a remix he did for another artist – a fellow Featured Find by the name of ELIO. As much as I loved the original version of "@elio.irl," there was something about Melchor's reworking that genuinely spoke to me on a spiritual level. Soft-hued, yet multifaceted – like looking through a prism into a more gentle world – it remains one of my favorite remixes to date. Beguiled beyond belief, I immediately set about listening to the rest of Melchor's discography – and the rest, as they say, is history.

Born in New Jersey to a family of creatives ("My parents were both music teachers, my grandma was one, my uncle is a professional bass player, my sister is still a music teacher, and my grandpa was in the New York Philharmonic," he revealed in an interview with 1883 Magazine), Adam Melchor was very much destined to make music. It was only after graduating from the Montclair State University with an opera degree (!), however, Melchor properly turned his attention to it – recording songs in his bedroom by day, before shifting to a makeshift studio in his car by night. Eventually, Melchor's quiet folk musings started to pick up traction online, with one of his earliest singles, "Metadata," featuring on Kendall Jenner's Apple Music radio show, and its follow-up, "Real Estate," earning almost 24 million streams on Spotify.

Nowadays, Adam Melchor's fanbase stretches far and wide, and even a casual dip into his discography will tell you why. With an innate ability to tap into the human experience and render it through ethereal folk songs and crushingly immediate lyricism ("I still find your hair in my bed/In my clothes, in my mouth/In my nose, oh, who knows?/If you'll still be there when/It's all said and done/Or if I'll just find less from now on," he sings in "Real Estate"), Melchor is quickly shaping up to be a singular talent. His voice is dreamy and soothing, yet melodically knowing – reminding me a great deal of Fleetwood Mac's Lindsey Buckingham or Electric Light Orchestra's Jeff Lynne. And while there are no obvious nods to operatic past, it's possible to hear Melchor's classical ear in his overall thoughtfulness toward his craft, with the moments of distortion here and the well-placed horns there only ever embellishing – never distracting – from their surroundings.

Having recently signed to Warner Records and released Melchor Lullaby Hotline, Vol. 1 – a collection of songs originally drip-fed to fans through a hotline set up during the darkest depths of quarantine – Adam Melchor's rise has been nothing short of meteoric over the last few months. That's not to say Melchor has lost that personal touch that made his music so popular to begin with, of course, with cradle songs such as "Last Time" and "Moon in the Morning" already reassuring us this isn't the case. But with artists like Ashe and FINNEAS currently bridging that gap between folk and the pop industry mainstream, it almost certainly seems as though Adam Melchor is next in line for the big time. We Are: The Guard, for one, will be cheering him every step of the way. 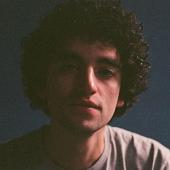