FEATURED FIND: ALTERNATIVE-POP PRINCESS NERIAH IS MORE THAN GOOD AT IT

The music industry is undoubtedly more cramped and overpopulated than ever, but the good news? It's becoming easier and easier for artists to find their voices amid the crowd. With apps like TikTok and Voisey cutting out the middleman to provide a direct line to fans and audiences, musicians can go from relative anonymity to superstardom almost overnight. Case in point: NERIAH, an upcoming alternative-pop princess who recently enjoyed a taste of online fame after going viral on TikTok with a clip of her latest single, the awesome "AT LEAST I'M GOOD AT IT."

Born in Los Angeles to the American television personality and Dancing With the Stars veteran Brooke Burke and Extreme Makeover plastic surgeon Garth Fisher, Neriah Fisher is no stranger to success. While some individuals raised in such an environment are more than happy to rest on their family laurels, however, NERIAH has never been one to depend on her parents. From posting fashion hauls and makeup tutorials to YouTube to progressing to covers and original music, NERIAH has, in actuality, been soft-launching her career for almost a decade.

I KISSED A GIRL BY KATY PERRY - COVER BY NERIAH FISHER

Since relocating to TikTok, NERIAH has continued to see her music and personal brand surge in popularity, beginning in November 2020 with the release of her official debut single, "Loner." A tender, crushing piano ballad written about the sudden and unexpected end of a friendship, it presented NERIAH as a master feeler- unafraid to document the most painful, intimate experiences of her life through her songs. Unsurprisingly, the 21-year-old has only thrived since that time, clocking up over 82,000 followers with her seven-second slice-of-life videos.

With TikTok introducing her to a new audience, NERIAH has kept busy over the last two years with a steady stream of singles, including her most popular cut yet: "Want You Back." Described as "knowing you need to break up with someone, but not doing it because of the fear that you might want them back," "Want You Back" stands among NERIAH's most fully realized efforts in her catalog. Bringing together flickering beats and despairing powerhouse vocals à la Tate McRae or Madison Beer, "Want You Back" has all of the hallmarks of a million-dollar hit.

NERIAH - WANT YOU BACK

As summer approaches, NERIAH is getting ready to begin a new chapter in her story this Friday with the release of the killer "AT LEAST I'M GOOD AT IT." Showcasing a rocky edge not dissimilar to GAYLE's massive "abcdefu," "AT LEAST I'M GOOD AT IT" is already sending shockwaves through TikTok after NERIAH went viral with a particularly anthemic car singalong. To celebrate, We Are: The Guard recently caught up with this alternative-pop starlet to discuss the inspiration behind "AT LEAST I'M GOOD AT IT," plus learn more about her love for a certain Julia Michaels.

WE ARE: THE GUARD: Hey Neriah! Thanks so much for taking the time to chat with us. Your upcoming single “AT LEAST I’M GOOD AT IT” sounds ‘edgier’ and perhaps more rock influenced than some of your previously released songs, what made you want to create something a little different?

NERIAH: Thank you so much for having me! This was the first time that I really experimented with this sound! I got so comfortable sticking to the singer-songwriter realm and thought it would be fun to try something new. While we were writing this song, we had the most amazing session and everyone worked so well together. This is one of my favorite songs I have ever written, and I definitely want to do more like it.

WE ARE: THE GUARD: What inspired "AT LEAST I'M GOOD AT IT?"

NERIAH: We all have that one ex that no matter what, we always find ourselves going back to. We wanted to make a playful song that everyone can relate to. Everyone has their bad habits and being drawn to a toxic ex is no new one.

N: I definitely do not have a least favorite part about it. We actually wrote the song and recorded all the vocals the same day. Me, Alec, Dan, and Jesse all did a session at my home studio and the track came together pretty quickly. We all had really great chemistry in the session and had a lot of fun creating it. My favorite part was definitely how open everyone was to all ideas. I remember we were all joking about how even though we know we’re not supposed to, we go back to toxic exes because we are addicted to the drama. Once we landed on the chorus, all the other parts came together quickly.

WATG:  Do you think your sound will continue to evolve as you release new music and if so, where do you want it to go? Maybe keeping with the rock theme, or maybe more R&B/pop like your previous releases, or maybe something totally different to those?

N: My sound will definitely continue to evolve as I release new music. I am the kind of artist where I do not want to stick to just one sound. Songwriting is one of my favorite things in the world and I love trying new sounds and exploring different genres. As an artist, my biggest priority is storytelling and I look forward to doing that in many different ways.

WATG: Who are some of your all time biggest musical influences, and have they changed/evolved since you first started making music?

N: My answer will always be Julia Michaels. She is a genius and her songwriting has definitely influenced me on so many levels. Everything she releases is pure magic. I also love Chelsea Cutler and Colbie Caillat.

WATG: Did you always know you wanted to be a musician? What was the moment you decided that you were going to pursue music for a living?

N: I started to sing before I could even talk. Music has always been my passion. I wrote my first song and got it professionally recorded when I was five years old. I have always felt such a special connection to songwriting, and I truly do not know what I would do without it. I always knew this was going to be my career, but it wasn’t until quarantine that I really finalized the vision of who NERIAH was going to be as an artist.

WATG: Being an independent artist can be really tough sometimes, so what keeps you going on days when it feels extra hard?

N: I really love what I do. Every time I am in the studio- whether it is a three hour or twelve hour session- whenever it is over, I always want to keep going. Although being an independent artist can be tough, I love every aspect of it. I have such an amazing team and support surrounding me and being able to always lean on them when I need it has definitely kept me going. I don’t know what I would do without my manager. He and I have basically become family at this point and I will never be able to thank him enough for truly supporting my vision and believing in me. My dad has also played a big role, he is my biggest supporter and is always cheering me on and pushing me to become better every day.

WATG: Who would be your dream collaboration?

N: Julia Michaels. Not even a question. Writing with her would be an absolute dream.

WATG: To end with a fun one, what’s a question you wish more people asked you and then can you answer it?!

N: I think one question I wish more people asked me was why I love songwriting so much. Growing up, music was so therapeutic for me and instead of dwelling on the hardships and tough experiences everyone goes through, I found beauty in them by being able to turn them into songs. I love to give advice and to help people with what they are going through, and through my music, I hope I can change peoples lives with the same intensity that other artists and songs have for me.

“AT LEAST I’M GOOD AT IT” is available now on all streaming platforms! 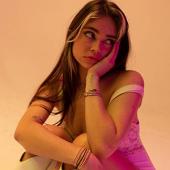