FEATURED FIND: MEET HOLLY HUMBERSTONE, THE SONGWRITER TAKING OVER THE WORLD WITH VULNERABILITY AND HONESTY

After being named Apple Music’s Up Next Artist, performing on Jimmy Kimmel Live, appearing in the New York Times, and releasing her debut EP, Falling Asleep At The Wheel, it’s quite clear that Holly Humberstone is having a gigantic year.

And she’s having that year for all the right reasons.

The first of those reasons being impeccable songwriting. Her writing is airtight, inspires emotion, and every single line packs a punch. Humberstone covers everything from growing up, to heartbreak, to mental health struggles, feeling trapped in a relationship, as well as the excitement and nervousness of falling for someone new. It’s relatable and raw through and through.

The second pillar here is her voice. She sings each lyric with such honesty, such finesse, and grace. Her unique vibrato and great control allow her to deliver lines that feel conversational, as well as others that soar.

With the help of Rob Milton, the production and arrangements truly serve the songs. The electronic elements are tastefully done, and while the whole Falling Asleep At The Wheel EP feels organic, natural, and human, it feels equally as intentional at every step.

If you couldn’t tell, we’re big fans over here at We Are: The Guard, so we were stoked to have the opportunity to ask Humberstone some questions about her life and creative process:

WE ARE: THE GUARD: What’s something you’re uber passionate about i.e. a hobby, interest, cause, quirky or unexpected thing about you that people might not guess and can you tell us a little about that?

HOLLY HUMBERSTONE: One thing I’m really passionate about and that’s really important to me is spending time with my friends and family. I find I’m most inspired when I’m out experiencing stuff and I just think it’s so important for my mental well-being too. I’m at my happiest when I’m just sat somewhere with a big group of people I love.

WE ARE: THE GUARD: Who's one artist you love that needs more attention right now?

HOLLY HUMBERSTONE: I’ve recently been really into Baby Queen. She only has two songs out at the moment, but she’s so fire and her song “Buzzkill” is the best thing I’ve heard all year, she’s sick!!

HH: Probably to just be grateful for the stuff going on in my life and the people I have around me. I often feel like I always have to be on the go and I’m constantly pushing myself to do more and be better. Sometimes I have to force myself to stop for a second and realise how cool my life is now and how lucky I am to be able to do what I do.

HH: I’d consider it a success if I’m still making music I love in 5 years. Writing has been a huge help to me for so long, and I just hope I’m still able to do it for as long as I can. I think as long as my writing is honest and genuine, then someone somewhere is going to be able to connect to it.

WATG: Do you believe in ghosts? Have you ever had a paranormal encounter?

HH: I’m personally not sure, but my best friend Scarlett’s mum is psychic and I swear I believe her. She’s been to my house a few times and always says she thinks it’s haunted. It’s a very old house and I think lots of people have probably died here. I’ve lived in the house for 18 years, so if there are ghosts here then they’re nice ones!

WATG: What fad do you wish would come back?

HH: I miss those jelly aliens that came in goo inside a plastic egg. I remember being so obsessed with those in primary school and the smell being so comforting and my mum being pissed when the goo got matted into the carpet of her car. I also believed all the rumors that they gave birth out of their backs, but mine never did.

As a blog that values great songwriting, we love asking artists to break down a song of their choice. Humberstone selected “Overkill” and let us in on the process of making the track.

A couple more tequilas
And I'll tell you how I'm feeling

HH: I remember getting this first line in the session and just being so buzzing. We put it on a loop and were just screaming it. It was all we had got of the song, but we knew we were on to something so cool.

HH: The song is about the start of a relationship and wanting to tell this person how much I liked them, but didn’t want to scare them off if they didn’t feel the same

I'm spending all my money, yeah, yeah
Going up and down the country
Just to leave you on a Monday morning, same old story
Here we go again

HH: I wanted to capture the confusing mix of emotions when you’re falling for someone for the first time. At the time it was exactly what I was going through; it’s scary but it’s really exciting too.

We're running out of moonlight
Just tryna use the time right

HH: The guy I wrote it about lives quite a long way up north and I was based in London at the time, so it was a pretty long distance thing and we had to savour the time we got together. I remember not wanting to feel tired or fall asleep because if I let myself then the next thing I know, I’d be on the train home in the morning.

Does it have to be a big deal?
Babe, however you feel
No, I won't
Make a fuss
No, I won't
Cause a scene
And my heart keeps racing, racing
Still I'm over being overkill, and
You don't have to say it back
I just wanna know where your head's at

HH: For this last bit we wanted to do loads of layered vocals. We’d been listening to Fleetwood Mac at the start of the session and they always have such huge sounding iconic layered choruses and we tried to layer as many cool harmonies as we could

Falling Asleep At The Wheel is out now via Platoon. 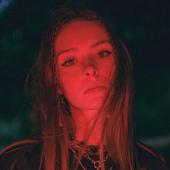