THE NEW INDIE MUSIC YOU NEED IN YOUR LIFE THIS WEEK

May the Fourth be with you, everybody! Ooh, so, here's some exciting news: According to Elon Musk, Grimes is due to give birth today! If this isn't the most perfect day for our Intergalactic Queen to have her baby, then I don't know what is! Anyways, while we wait to see what our favorite power couple have named their child (and, no, it isn't Influenza), it's time for the latest edition of We Are: The Guard's New Indie Music. Just grab a lightsaber and get down like Darth Vader to the following songs from Woodkid, HAIM, Arca, and more.

Woodkid is raging against the machine on his first single of the decade – “Goliath.” “It's about scale, about toxicity. About these insane industrial machines that represent so well my fear and ambiguous attraction for human madness,” writes the French auteur also known as Yoann Lemoine of the song – a sinister, gargantuan low-end banger that rattles and throbs like a factory line, with lyrics that hint at rising up against the corruption, exploitation, and inequality of late-stage capitalism.

HAIM are really about to drop one of the best albums of the year with ‎Women in Music Pt. III, huh?! Following on from the release of the Stones-esque “The Steps,” the sibling  trio are leaning in a more electronic direction on “I Know Alone” – a shifty, percussive dance piece about loneliness that hits different in our weird new quarantine world: “Been a couple days since I've been out/Calling all my friends but they won't pick up/Found another room in a different place/Sleeping through the day and I dream the same.”

Oliver Malcolm keeps on delivering the goods, doesn't he?! Having made his debut on We Are: The Guard earlier this year with the chaotic blast of bombast “Helen,” the British-born, Los Angeles-based musician returns today with “Kevin.” “London Town raised/Purple haze in his brain/Fucked up again,” sings Oliver on the genre-agnostic groover, with thickened basslines and spitting beats backing the rising artist as he proceeds to oscillate between husky, soulful tones and hip-hop fervor like the transfixing chameleon he is.

There's no shortage of quarantine anthems currently floating around the Internet, but none of them are quite as relatable as “Life Inside” by Verzache. The Toronto artist is succinctly capturing that sense of millennial monotony that comes with living the prime of your life under lockdown on this playfully fresh bop, with guitars chugging away beneath Verzache as he sings: “My life inside/Wish I could get out and go ride a bike/Head in the wind, and know what it's like/Hang with my ones like we did all the time.”

Exclusive footage of me listening to “The City” by British experimental-pop duo Jockstrap (stay until the end of the song to see what I mean, ha ha): 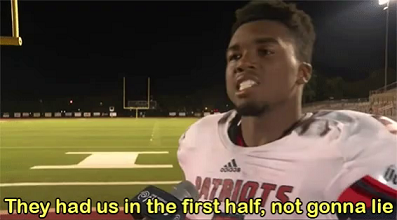 Venezuela's Arca celebrates her many and multiple selves on the propulsive two-minute opus “Nonbinary.” “I don't give a fuck what you think/You don't know me/You might owe me/But, bitch, you'll never know me,” spits Alejandra Ghersi over the clinking, clanking sounds of machinery on the cut – an ode to duality and defying categorization that comes accompanied by a video that sees Arca putting a dystopian, industrial spin on Sandro Botticelli's painting The Birth of Venus. Iconic, much?!

I'm a messy b*tch who lives for drama – to quote Joanne the Scammer – and serpentwithfeet is giving it to me in spades on “A Comma.” Featured on his recent EP – the must-hear Apparition – “A Comma” is a deeply grandiloquent piece of high art that truly reminds me of the more theatrical side of Freddie Mercury, with Josiah Wise's operatic vocals reaching near rapturous heights as he pleads for a kind of divine intervention in his life: “I pray for punctuation/Lord, be a comma/Or better karma/Or a sweeter situation.”

Every once in a while, a song comes along that completely knocks me off my feet. Case in point: “bummy!” by boylife. The solo pursuit of Los Angeles act Ryan Yoo, boylife is taking us on quite the adventure on this three-minute genre-bender. Opening to a crescendo of strings before switching things up with hard-hitting beats and almost maniacal hip-hop swagger, “bummy!” is an example of contained chaos you can file next to Tyler, the Creator circa IGOR and the more experimental sonic explorations of BROCKHAMPTON.

Can I be completely honest?! It's songs like this that really make me wish we weren't in lockdown right now. Something tells me British troubadour and purveyor of so-called “acid-soul” Yellow Days is also missing long, hot nights spent with friends and lovers going by his shimmering latest single “Treat You Right.” With funky, retrodelic synths interlocking with George Van Den Broek's smooth vocals, “Treat You Right” is a dazzling R&B groover that most definitely demands to be added to summer mixtapes everywhere.

Having already produced for the likes of Lil Nas X and Young Thug, Dirty Hit signee boyband is stepping out on his own accord today with the emotionally wrought “realtree.” With gurgling emo riffs rubbing shoulders with skittering trap beats, “realtree” is a genre-melding banger that refuses to be placed in any one box or category, with boyband topping the whole thing off with his intensive vocal display: “You know I'm so dead inside/I got all this pain to hide/Gave me hell and gave me lies/Don't be surprised I said 'goodbye.'”

Until next time, why not follow We Are: The Guard's Weekly Chart on Spotify for more?! xo

Photo by Moises Alex on Unsplash