Shit, it’s winter and you’ve been hibernating eating LOTS of soup and carbs and getting distinctly OUT of your sexy summer swim suit shape, haven’t you? Time to shape up and ship out or Shape of Water and ‘ship with a fish 'cause April is RIGHT around the corner. That means it’s about to be *warm* again and the world’s most beautiful people (you included) will soon be carousing around the (Goldenvoice owned) Polo Fields for three whole days (and three short nights) of the best music (and people watching) that anybody could ever ask for.

Oh Gosh, I love Coachella. Three months to get back in shape for the single greatest party of your or any of our lives. Actually, I’ve had the greatest party of my life and it wasn’t Coachella, it was a birthday party for my friend's dog and there were all these dogs running around wearing party hats and eating cake and I was like “OMG,” but I digress because this is about Coachella and not my life, even if “Coachella is Life.” yasssss.

The lineup dropped, the festival sold out, now it’s just up to you to make the rest of the weekend magical. Can you do it? Well how about first you educate yourself with this killer lineup? Haim, Kygo, SZA, Tyler the Creator, Vince Staples, Alt-J, Odesza, Portugal. the Man— HEARD OF EM. The Weekend, Eminem, QUEEN BEY— DUH, WHAT ARE YOU NEW?

But what about some of that small print stuff? You know the one you *actually* have to put your glasses on to read like at the DMV? What’s a Jason Bentley? Exactly. We've rounded up the best small print acts at Coachella Friday and Sunday, and now let's check out Saturday's must-see performances.

In the past couple of years the Black Madonna has risen up amongst the ranks of the finest house DJs working. Her sound is clean and distinct and the most fun you can have on the dance floor without getting arrested for lewd conduct. This isn’t the Chicago Native’s first trip out to Indio, she first made the trek out in 2016 where I *gasp* first heard of her. Check out what I said in 2016, I still stand by it. 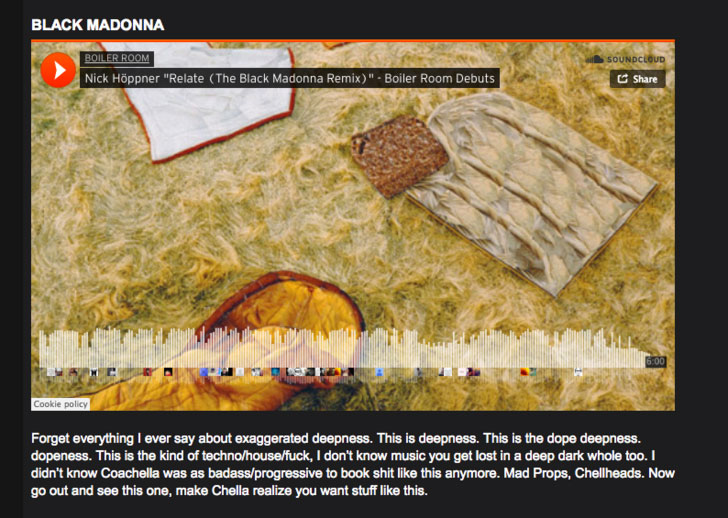 Remember when all your favorite electronic acts played before you knew about them? Disclosure when they were in a tent in front of about 200 people? Nick Murphy back when he was still Chet Faker? Well don’t sleep on Tom Misch cause he’s about to be the next big thing and from what I hear you like big things. Tom Misch has got a funkiness reminiscent of Jamiroquai. Is he the modern equivalent? Who knows? Gotta go check out both sets to find out.

Well who knew there was such a thing as Japanese Butt Rock? Not I. But what I think we need to do is all go to this set together and find out what the Japanese equivalent of Meatloaf is? Can you make that promise to me right now? It’s a pact. A blood pact. Don’t let me down. I think we all need to see some symphonic Japanese progressive hair metal together. Group meet-up stage right.

Flatbush Zombies are the perfect representation of the darker sides of hip-hop. This Flatbush Brooklyn trio rides the line between acid nightmares, horrorcore and hiphop into something so uniquely theirs that most people have no clue what to make of them. These guys put on a hell of a show and I’m sure there going to bust the hell out of Coachella this year. Plus this is closest the festival might ever get to booking Insane Clown Posse, so let’s pack that stage out so the Juggaloes get a chance to come in 2019. Note: Flatbush Zombies are not Juggaloes, I’m just making leaps here because I can.

Formerly known as Orinoka Crash Suite, OCS, Orange County Sound, The Ohsees, The Oh Sees, and Thee Oh Sees, the San Franciso garage rock quartet are now simply going by Oh Sees. The guys sure rock out on some of the best garage psych this side of the sixties. Only they can pull off a 7 minute scuzzed out anthem like this. Now lucky you, you get to get faded on legal California Weed and zone out while these guys absolutely destroy the notion that rock is dead. It’s alive and well it’s just been hiding up at Haight-Ashbury like basically always. Peace, Love & Scuzz.

Okay hear me out. In 2017 Coachella books three of Daft Punk’s biggest collaborators (The Weekend and Nile Rodgers with motherfuckin’ Starboy and Get Lucky respectively.)  But what about this little nugget? Ed Banger boss, former Daft Punk manager and architect of the entire French electro movement, Busy P? Normally when Busy P gets booked it’s alongside one of his many acts like Justice or SebastiAn or Breakbot. But this year it’s just him? Suspicious much? This is where I’m expecting the Daft Punk cameo that the world still waits on with baited breath.

LOL THE ILLUMINATI IS REAL AND DAFT PUNK IS NEVER GOING TO PLAY EVER SHUT UP ABOUT IT. But do go watch Pedro Winter absolutely destroy some french touch electro and hiphop. Party, legend status.

Last time AC was on the poster was 2016 and he was the last name on the lineup (even though he first played back in 2009. To quote Rodney Dangerfield, “I get no respect.”) As his Night Bass imprint keeps blowing up and killing it across the globe with AC Slater’s unique brand of bass house booking stages at just about every electronic music festival you could possibly imagine, it looks like he’s finally getting some of that respect he deserves. I’ve profiled AC Slater before so I won’t go too deep on this one, but come on check it out. But he’s dope and original and come see what the hottest party in LA is all about.

Catchy Indie Rock from LA? Damn this has got Coachella written all over it. Let’s all make sure to watch Sir Sly’s set  now before they’re a subheadliner in a matter of years. It’s inevitable with tunes like this. Soon they’ll be in like alt-J’s slot and you’re gonna be like “what the hell happened they used to be small font, why didn’t I listen to We Are: The Guard in 2017?”  I don’t know man, that’s on you. All I’ll have to say is “told you so.”  Listen to this song on repeat until Coachella because this is without the catchiest song from anybody on the entire lineup. Well, other than Jamiroquai.

Skrillex’s favorite indie rock band (and the only non-bass genre act signed to his OWSLA label) might just be one of the best bands making music out there. These guys (and lady) throw their own festival out in the Arizona desert with everyone from James Blake to Bonobo to Thundercat to Solange to Father John Misty to Future Islands to Four Tet to Saul Williams performing. Say what? Their song with Chance the Rapper Show Me Love is one of the best tracks I’ve ever heard in my friggin’ life  and its about fucking time this band got some of the recognition they deserve outside of the other most baller musicians out there recognizing their real.

Pachaga Boys - Time is one of the all time greatest Playa House (aka Burning Man House) tunes and they’re going to sweep Coachella off their feet. I know that traditionally the trajectory is Coachella -> Do Lab Stage -> Lightning in a Bottle -> Burning Man but after you see the Pachanga Boys you’ll be cutting out the middle man and heading straight for Black Rock City.

Photo by Jade Masri on Unsplash